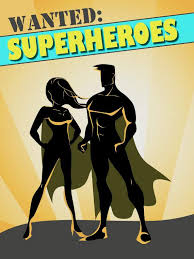 A while back, I posted a blog about why I write about superheroes. I’d likened them to our version of a contemporary pantheon, where the all-too-human, personal decisions based on anger, greed, love, jealousy, loyalty, and so on have much more pronounced consequences than for us regular folks. I’d discussed the idea that we route for them and watch them struggle because we identify with them: even our heroes struggle, and sometimes the conflict is with other heroes they have to work with. We don’t have to look much further than Superman and Batman, Tony Stark and Steve Rogers, or the Guardians of the Galaxy to watch how personal needs and problem-solving styles can clash with potentially disastrous results.

I’m going to take that idea a step further: we grownups need superheroes. They may not always look like the ones in the comic books; some people’s heroes are celebrities, sports figures, and so forth. No matter what though, there seems to be this deeply-rooted need for us to look to larger than life figures for hope and inspiration.

Historically, superheroes were written with adults in mind. Siegel and Shuster created Superman in the thirties, and Simon and Kirby conceptualized Captain America in the forties partly in response to the harassment they received for their cultural and religious backgrounds. Superman is a symbol of American hope not because of pure might, but because he’s an immigrant. He has to hide who he is in order to fit in with society. In America, we use that image of the melting pot a lot, but there’s a flip side to melding one’s identity and uniqueness with the general public. On the other hand, America also identifies with individuality and independence. Clark Kent and Superman are two sides of the same, national coin.

So, in the thirties and forties, we saw Superman and Captain America hitting a whole lot of Nazis. Now, to be fair, they also hit a lot of Asian people, especially of Japanese heritage, and those comics, although based on the premise of not being bullied because of who one is, did an awful lot of just that during the war. Superheroes became popular in part because they were such great propaganda tools and, like the human beings involved in writing their stories, weren’t perfect.

Captain America in particular embodied the notion of being a better person, a hero, by being strong for our country. In fact, it wasn’t uncommon for World War 2 soldiers to keep copies of comic books as inspiration when they were far from home, huddled together with others like them because moving outside that circle was dangerous, and fighting the good fight. Both characters generally reflected the balancing act required by (especially European and Jewish) immigrants in order to make it in the United States.

Wonder Woman also was a polarizing figure for a very long time. William Marston, her creator, was a progressive feminist who worked closely with Margaret Sanger (responsible for birth control rights). Marston’s intention was to remove the weak, empty-headed stereotypes of women so common in popular culture, 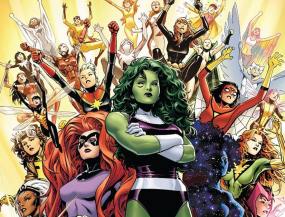 especially in the forties. He explicitly stated that Wonder Woman was meant to represent a new framework to for women to embrace their innate power and run the world. While Diana Prince didn’t end up changing much legislatively, she sparked the imaginations of many, many women and girls excited to see someone that powerful who was in other ways just like them. And, more powerful women were to follow.

The fight for equality taken up by superheroes continued into the sixties and again, made a huge dent in the general psyche of readers. Many Americans, especially during the time when the Jim Crow Laws were the law of the land, were often too uneducated, too sheltered, or too bigoted to see racial or gender issues clearly. Comics made progressivism accessible. Sure, no one probably put down an issue of Superman and said, “My eyes have been opened to the injustices in my country,” but seeds were planted. Perspectives were altered a little at a time.

This was why comic book superheroes got so silly and campy during the “Silver Age” of the sixties. Government agencies were putting pressure on comic book presses to lay off the political messages. Investigations of writers and publishers were threatened.

When the war was over, Superman and Captain America didn’t stop fighting for that balance. They moved from beating up Nazis to beating up Klansmen, and here’s another example of just how powerful these pretend people, these comic book gods, were to the general public in real life. People got angry in the fifties and sixties when they saw these all-American heroes’ blatant, unflinching stance against racism.

Eventually, Marvel stopped towing the line and introduced the X-Men. It is said that Stan Lee modeled Magneto and Dr. X on the ideologies of Malcolm X and

Martin Luther King, Jr., even if the storylines and themes diverged quickly. Think about this: while Magneto usually was cast as the mastermind villain, his backstory is tragic and sympathetic. We usually totally get how what happened to him could change a person, and he usually has compelling reasons for his attitudes if not his actions. The best villains are the ones we can’t write off as merely “evil.” Suddenly, superheroes added several layers of depth to their existence, and the public responded positively. More people of color emerged as heroes. We had the Black Panther. We had Luke Cage. And gradually, the superhero pantheons diversified.

Post-9/11, superheroes fought Islamophobia. Captain America, Spider Man, and Superman all call New York City home. They became symbols not just of America’s backbone and its power to rise up from the literal ashes, but also of resistance to political fearmongering and intolerance. That was a major issue in Civil War, and an ongoing one for the X-Men.

Now, superheroes fight against police brutality, white supremacy, and systemic racism. Their fight matters. Their ideals run deeply within us. In 2017, Superman saved immigrants from a white supremacist in one storyline. The moment made headlines when Fox News commentators wondered on-air why Superman didn’t leave the immigrants to die.

We have LGBTQ+ heroes now, and women taking over traditionally male roles, such as Green Lantern, Thor, and Captain America. Again and again, our pop culture art reflects the changing landscape of the American body, and also shapes it. The popular new movies we all seem to love are, of course, primarily escapist money-makers. However, much of their appeal is due to their ongoing themes of interconnectivity, and audiences keep coming back. People

threatened to boycott Marvel after Black Panther famously made a case for creating bridges instead of walls. I don’t think Marvel noticed a dip in their profits. People respond positively to these messages on various levels of subtlety.

Even our anti-heroes resonate for a reason. The Guardians of the Galaxy and Deadpool aren’t generally in the hero business because of their principles. They began as mercenaries. Due to circumstances, they eventually do the right things, but we identify with their frustration. As individuals and as a society, we’ve anguished over being ethically right even though the law says otherwise. While regular people are usually cut off from options, these figures are not and again, we want to watch their struggle to make it.

Of course, the gender, racial, and other politics presented in superhero comics aren’t perfect. We have a long way to go, and oh, boy were mistakes made along the way. Again though, part of the point, and part of the appeal, is the journey toward improving our understanding of who we are and what we need to do.

Superhero stories are more than modern takes on classical mythology, and more than figures of fandom. These characters speak to our social make-up. They simultaneously lead the way to being better people and creating a better world, and reflect the work to be done. Even if they aren’t wearing spandex or wielding gadgets, we need those figures to turn to for guidance, and to be our collective voice.