The Answer to It All (or maybe not)

Here's a question I'm asked regularly: “Why are you writing about superheroes?”

The short answer harkens to mythology, which I’ll address in a few moments. Anyway, I got that question a lot as people began to give feedback on the earliest versions of The Persistence of Memory. At the time, I’d been focusing on the love story between Daniel and Nina. The superhero subgenre was a means to bring them together: they’d have a problem in common concerning their pasts and their identities and purposes in life. In all honesty, the superhero part of the plot was hazy to me early on, and it didn’t solidify until I got to know my characters much better. I based my ideas on character concepts and personalities, which made plotting a bit difficult.

Still, it remains a good question. Why not spies, or detectives, or just two people in a straight-up romance? If you want my embarrassing, unvarnished truth, it’s because of a particular superhero character in a particular movie franchise played by a particular actor with whom I may or may not have an unhealthy obsession. Fanhood was just a springboard, though.

When I had a better grip on the plot, I would give a more dignified and equally true answer. I find genre fiction predictable a lot of the time, and I get bored easily. I start to pick at the predictable clichés in the plots and character behaviors when I read romances, and don’t even get me started on “erotic fiction.” My characters had to have more obstacles to their relationship than only normal stuff like a jealous ex or finding out they are on different sides of a larger feud. Giving them larger than life problems to attack deepened my understanding of their problem-solving styles and their underlying flaws and psychological issues.

This of course led readers to another complaint, and I still get this one with the books now that they’ve been published for over a year: why are the characters so powerless if they’re heroes? I decided early on that my heroes would have to be at a disadvantage much of the time. I didn’t want their powers to be the stars of the story; this was meant as a character-driven series. So, Daniel is unnaturally strong and hard to kill, but he’s not bulletproof and there are enemies out there who are stronger than him, or smarter, or just more focused. He fights from an emotional place much of the time, which sometimes serves him well and other times causes disasters. Nina is a goddess. She can fly, she is also unnaturally strong, and although their skills are different, is at least as potent a fighter as Daniel. However, fighting with spears against Phoenician soldiers is a far cry from modern life, and her confusion is apparent in all aspects of her life here in the twenty-first century. Miriam is super-fast, but she doesn’t have any other powers. Graham is a crack shot, but that doesn’t help him much in hand-to-hand combat with a ten-foot tall humanoid tiger (spoiler).

Not only that, but I decided to give each main character and supporting character distinct perspectives and agendas that put them all at odds with each other. To me, it made the group dynamics more interesting. The fight wasn’t just about the bad guys; it was about being a team and delineating between what each needs as an individual vs. their responsibilities to the world and each other.

Even so, this easily could have been a story about athletes on a team, or people in a corporation. It still doesn’t answer the question. Here’s the answer to why I chose superheroes:

When the stakes are raised to the survival of the world, the characters’ personal decisions can have devastating consequences for everyone else. Daniel is constantly torn between looking out for Nina and focusing on winning battles. Nina was a celestial general for 3,000 years, and now she has to follow orders—the orders of someone she happens to love. Add that they all have unique angles and limitations, they need to learn to work together, and it isn’t always easy or pretty.

Superheroes’ personal decisions affect the world much as those of the gods and goddesses in various mythological stories. When Gilgamesh rejected Inanna and she wanted to get even, her solution was to reign down a devastating drought for ten years upon his kingdom. When Hades set his sights on Persephone and dragged her to the Underworld, her mother didn’t just grieve. Her mother’s grief caused her to ignore the harvests. People starved. It was the vanity of three goddesses that provoked a kidnapping and a devastating war involving a big, wooden horse. Odysseus pissed off the son of a god as he sailed home from war and ended up off-course for ten years, dodging monsters, giants, and other vengeful deities. Personal decisions have wide-ranging consequences.

We don’t worship the Greek or Sumerian pantheon anymore, but we certainly worship powerful people and entities if not religiously, then at least in fervor. I mean, ask someone what they think of Tom Brady and you’ll end up with a big fight sometimes. Human beings naturally seem to want heroes—people who can do more than them, people who will somehow save them from everything wrong in the world. Barry Allen can save the world from collapsing on itself, or he can save his friend from eternal imprisonment in a time vortex. Every time he thinks he has a risky plan to do both, he alters the course of history enough to make the world unrecognizable. Yet, superheroes, like us, have loves, desires, and needs. We root for them even as we watch them risk the rest of humanity to save the love interest.

Furthermore, superheroes have the same powers once ascribed to the gods. Zeus and Superman both are the strongest of leaders, can shoot fire and ice, and pretty much can overpower an entire army of human beings. Hermes has super speed like the Flash. Whereas once we had Poseidon, now we have Aquaman. Batman, like Hades, lurks in the shadows, usually alone, and people are a little afraid of him. Wonder Woman is based in part on three separate Greek goddesses. 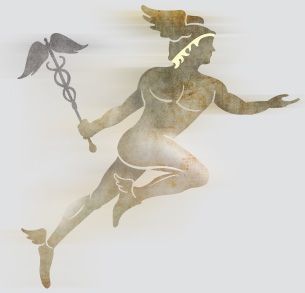 What’s compelling about our heroes are not just their powers, though. The powers are what make us stand back in awe, sure. But, we are drawn to them because regardless of their unnaturalness, they are profoundly, heartbreakingly human. We feel the pain of a grieving mother when Persephone returns to the Underworld with Hades and the land begins to die for a couple of seasons. We feel Calypso’s heartache when, after loving him for years, Odysseus leaves to continue his journey home. We want Peter Parker and M.J. to make it as a couple and for Spiderman to continue to save us from Doc Oc.

Life is hard for us mere, regular mortals. We trudge through our days and carry our family dramas, petty arguments, and money worries everywhere we go. How we handle ourselves in the face of our personal obstacles is part of how we define our own character and ethics. Now, imagine that having to choose whether to have Thanksgiving at your folks or your in-laws will result in literal, Earth-shattering disaster rather than just pissed off family members with new grudges. We want to see how they do it, these beings who are somehow bigger, better, and more perfect than us. We want the model. We want to figure out how to meet all our needs and responsibilities. We want to learn how to save us from ourselves.

The thing is, at least in my stories, the heroes aren’t better than us, and they agonize over the right thing to do. They might not get it right all the time, but they do keep trying. They grapple with their interpersonal difficulties even as they make tough choices to get the job done, hopefully with nobility and grace, but not always. Then, they have to make right the new problems they’ve created for themselves and the world, and life goes on.

Why superheroes? Because they’re the most human of us all.