The Family that Slays Together... 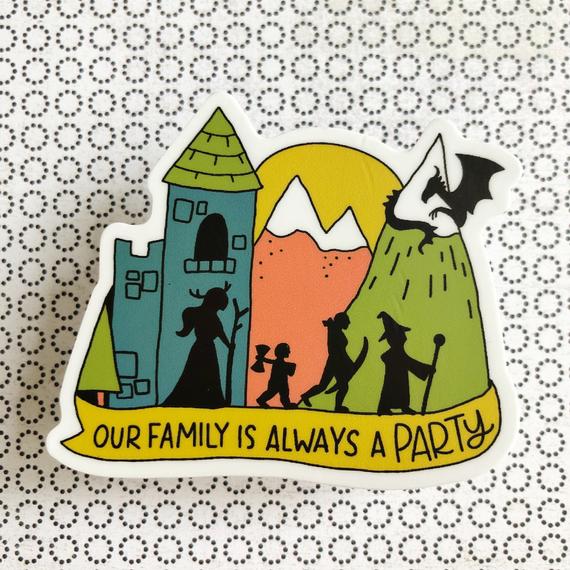 Well, the planned tagline was “stays together,” or something like that, but my son and I just played two characters apiece for a one-off D&D 5e module run by my husband the other day. We didn’t slay much other than a few R.O.U.S.’s, but we did slay those, I suppose. I prefer the role-playing part to the battle part of gaming, anyway. At any rate, during these quarantined times, a controlled way of communicating through fantasy kept us from getting on one another’s nerves.

The Family That Slays Together Avoids Slaying Each Other.

My fifteen-year-old son has been a tabletop gamer since he was old enough to roll dice and know not to stick them in his mouth. He’s down for just about any system and genre and has been playing with a group of fifty-year-old or older men all his life. In fact, when I was pregnant, our gaming friends bought us portable EVERYTHING in order to keep us coming every week.

Benji is a cool kid, not that I’m biased or anything. Having said that, he’s neuroatypical and while he’s extremely high functioning and very, very smart (and I actually do have unbiased, numerical evidence for those facts), socializing is something of a problem for him. I used to worry that his social “peers” were men in their 50’s-60’s, most of whom had graduate degrees in the hard sciences (along with a father with a graduate degree in philosophy). Aside from role playing, that didn’t make for the other kinds of play that a little kid needs.

My hope, as with most moms, was and remains for him to navigate his way into adulthood happy and well-adjusted. I firmly believe that means hanging out with kids his own age. I worried about this for years, especially since his number of adult friends outnumbered his actual peer friends significantly from pre-kindergarten through the eighth grade.

Having said that, we’ve also been a game-playing, puzzle-solving family unit for all of Benji’s life as well. He loved Uno as a little kid, in addition to de rigueur childhood activities like Candyland and Chutes and Ladders. My husband and I worked very hard to instill in him an idea of fairness, following rules, and to be a gracious loser as well as a gracious winner.

High school happened this year (wasn’t he about six last week? Could’ve sworn…). Until then, he’d been in the same school with the same forty or so kids in his grade since kindergarten. They all knew each other; they all understood and accepted his idiosyncrasies pretty well, and he even made a few good friends. Those friends were districted for a different secondary school than him. High school is huge and scary for everyone, freshmen and parents alike. He was nervous and I was worried. I needn’t have been. He discovered the school’s D&D club.

Until the stay at home order, he gamed with his new friends twice a week, sometimes even running, and always, it seems, helping them create characters and interpret rules. He’s well-liked, and, to my relief, had a bit more of a “normal” group of friends to hang out with. Like I said, he was just in the first grade a few weeks ago, as far as I can recall. When did he not only grow up, but turn into a leader?

Some of it obviously comes from his experiences at school, learning how to do group work, things like that. I was thrilled to hear from his P.E. teacher that he was one of the more courteous participants in class when it came to inclusion and fairness. Some of it comes from learning through trial and error how to be with people who don’t automatically love him because they’re not his family members. Some of it, I think, comes from gaming though.

There have been studies done, of course, regarding the benefits of R.P.G.’s for kids, especially ones with similar challenges as Benji’s. Learning to be a fair player and work together via board games and sports allowed him to understand the social rules of gaming. Rolling dice made him an arithmetic whiz. More importantly, the same type of controlled fantasy environment among adults, as mentioned above, allowed him what he needed so much of, I think: practice relating to other people his own age.

As an aside, I have been told by multiple teachers that aside from wanting to interrupt all the time (a habit reinforced by gaming with adults who like to argue about the game rules on a regular basis), he’s lovely to have in class. His math teacher asked if we have any more of him (no).

At the time of that particular conversation, I immediately thought about the weekly real-life battles over my idea of cleaning his room and his notion of it, the slammed doors, the shouting about life’s unfairness, etc. typical of a teenager.

The takeaway from the meeting with the math teacher was that at home, he knows he’s loved unconditionally. He knows how to behave in the context of other environments though, give or take some stumbles. That’s an R.P.G. skill, no question.

Gaming, he can be someone else (sometimes more than one at a time), be given a prescribed list of personality traits and limitations, and operate within those confines for hours. He likes to play all kinds of characters, and even plays girls/women fairly regularly. He has, as he’s grown from boyhood into his teens, learned how to embody other perspectives.

This is why even though he doesn’t form deep connections easily, he gets along with pretty much everyone. This is also why G.M.’ing came so easily to him so quickly when he joined the high school’s D&D club this year, and, I think, why kids so readily accepted him as a leader in the gaming rotation.

Benji, his dad, and I still play board games regularly. Honestly, Benji’s got a better personality for playing than I do. I have the attention span of a fruitfly, for starters. Even with his underlying ADHD, he still focuses for longer stretches than me. I also have no idea how that kid doesn’t curse like a sailor constantly, having been around me during various games.

He loves winning of course, but no matter what, always tells us, “good game” and only gloats a little when he wins, no matter how competitive we get with each other while playing.

He never takes what happens at the gaming table, good or bad, away into other parts of his life. That’s a lesson it’s taken me, a champion level grudge holder, a longer time to learn. When did the learned behavior parenting model get turned upside-down in my house? My baby only just turned seven yesterday, right?!

Playing collaboratively with him this week, I got to see his young adult maturity in action. He played a wizard (because Mom’s attention span makes it hard to keep track of magic) and a druid (we needed a healer, and again, I’m really not the best choice for spell organization). I was a barbarian and a rogue. My two characters were more of liabilities than those being played by a teenage boy. For example:

Benji’s druid: “We can bring this lockbox (probably has coins in it, but I missed my lockpicking roll) back to the (dead, we discovered) shopkeeper’s family.”

My rogue: “Lockbox? Treasure? What are you talking about,” (tries to hide all the loot)?

Unlike when I play with adults, an argument among characters did not break out, and no characters tried to injure one another (Spycraft story for another time). My baby boy is turning out, it seems, to be a well-behaved, ethical, considerate human being, even when he’s an elf or a halfling. Those are traits he actually does bring from the table into the world, and vis-versa. I’m proud of him.

I also kept most of the treasure.