Don't Make Me Hit You With My Writer's Block

One of the questions I get in interviews or see all the time in writer chat groups is, “How do I contend with ‘writer’s block?’.” I have learned the hard way not to answer that question. It’s a trap. Most indie or untrained writers, it seems, see this as an opportunity to pontificate, and they all tend to argue with each other.

So, I’m just going to come out with it here on the blog, and that way, no one can yell at me in real time. Here’s how to deal with writer’s block: 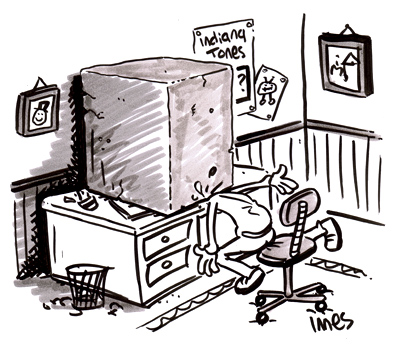 There is no such thing as writer’s block.

There. I said it.

Muse spirits do not exist, and personifying lack of will (I’m just waiting for my muse to visit—she’s abandoned me–see issue #3) is counterproductive. There’s discipline and lack thereof. That’s it. Sit your butt down and start writing. Doesn’t matter if it’s on your current project; doesn’t matter if what you churn out is the most awful dreck. You’re the only one who’s going to see it, anyway.

I think some of the problem here harkens to a few other issues:

Issue 1: Plotters The first is with people on the plotter side of the plotter/pantster debate. Why write something that isn’t going to be useful, self-identified pure plotters might object. The answer is a question in reply. Is everything you write for the first time perfect and relevant? Everything you write will need revision; I don’t care how good you think you are.

As Stephen King (and before him, William Faulkner) said, be ready and willing to kill your darlings. He’s not talking about beloved characters here. He means be willing to cut out parts of your writing that don’t contribute to the story. So, you might as well just write what pops into your head—either it will have potential, or it won’t. Writing is risk taking not just in getting things down, but in changing or removing them.

Issue 2: Pantsters The pantsters are no better. The point of outlining is to be sure your form follows the right pattern. Traditional fiction follows a particular path, involving parallel arcs for the characters and plot, and they need to be paced correctly to be effective. Again, this brings me back to revision. The first stuff you write, whether it’s for your project or not, will likely be skeletal at least, full of clichés, and probably lean on tropes too much.

Now, I am the first one to embrace the discarding of the rules and do something different. However, I’ve been studying literature and writing for a long time. Breaking the rules involves premeditation, which is something I think self-identified pantsters reject. Your writing needs to have some kind of a shape. Even in poetry, freeform isn’t just splattering words on the page wherever they fall. There’s planning and deliberation involved and believe me, those poems get revised. First draft absolutely does not translate to “raw and edgy.”

My point in both cases is you shouldn’t take your first, second, or even third draft and publish it, thinking it’s perfect. It isn’t. It might still be pretty bad.

As an aside, this is why I really don’t like “teasers,” those pictures on Facebook and Instagram that have a phrase from an author’s novel out of context. This is popular in poetry and in the romance genre, it seems. I have not seen one yet where I’ve said, Wow, that’s really good. Most of the time I cringe at the poor wording, stilted dialogue, and the clichés. I’ve been invited to do them in the past, and accepted. Even I don’t like the way mine came out.

Issue 3: Pressure to Publish Too Soon This brings me to the next impediment to writing. Composing isn’t a race, and this harkens back to the “silent muse” myth of either being full of ideas or totally dried up. It doesn’t work that way. I cannot understand why indie authors feel compelled to churn out novel after novel in rapid succession. It took me almost three months to write this, authors boast, as if that were a long time. The more pressure you put on yourself though, the more anxiety you’re likely to create for yourself, and the harder it will be to write coherent, fresh things. Take your time. Do a lot of research. Tinker with everything. Be a perfectionist (says the queen of typos, here).

Writing is a looping, discursive process. The experimentation and discovery phases shouldn’t be skipped, and again, they require discipline. Just because you finally wrote The End and proofread your work a few times doesn’t mean the manuscript is ready to see light of day, and you shouldn’t pressure yourself to keep up with anyone else’s output, especially not at the expense of quality.

I’ll add here that I know self-described authors who have never actually completed a project or published because they either haven’t felt visited enough by their imaginary muse or because they’re tweaking minute details and have been for years. That’s not good either, we know. But usually, it’s the rushing that I see happening.

Issue 4: Not Reading Enough (or at all) The fourth impediment to embracing writing discipline: not reading. On Twitter recently, someone asked if we thought in order to write well, you needed to read a lot. I’ll set aside the description of my horror at the sheer number of people who said, No, you only need talent and good ideas.

Not everyone has writing instruction and training. That’s okay, and talent is important. However, nothing prevents us from seeking out other ways to learn. I’ll add here that most “How to Write” books are pure rubbish. They’re retrofitted from already published work that has already been analyzed by critics (there are some outstandingly notable exceptions, like Janet Burroway’s Writing Fiction). This is another trap mostly the plotting types fall into, although pantsters are in no way immune.

There are no “correct ways to write” any particular genre. There are tropes and guidelines, but do you really want to produce cookie-cutter, mediocre books, stories, or poems? The worthwhile fiction writing books go beyond that, become more conceptual, and never say never. In fact, if a book or a person impose the limits of your own imagination, toss the advice. It makes for bad writing. That’s not what the good writing guides do, but I highly advise trying it their way first. A lot of those books are written by writing professors who have researched and studied craft all their professional lives. They know more than you or me.

Issue 5: Not Reading the Right Things The other responders to the question wholeheartedly said, Yes, and I read (insert number in the hundreds) of books a year. The problem is what they’re reading is often work by solely other recent, untrained, unseasoned authors, so they’re learning poor habits and mistakes rather than how to improve. There are exceptions, of course. Generally speaking though, indie writers end up in a kind of echo chamber in an effort to promote one another, all of us singing the praises of one another’s work and advice without much else to measure our work by.

A community of writers helping promote each other is fantastic. I love mine. This is about moving past mental impediments to creativity though.

Writing is a constant learning process. Authors need to read things that are better than what they themselves produce. I’m not talking about typical genre books that get churned out by publishers (or indies) seemingly every month. To me, that’s a red flag that the writing was rushed. Look for the works that have critical acclaim and reviews. If you write genre fiction, find the generally agreed upon best examples out there. As a caveat, not every book with a huge audience is worthy of emulation (or in some cases even a quick peruse). Let the greats inspire you.

For example, I love fairy tales. I especially love modernizations and retellings, and have written several as poems or short stories. There are some stories I can’t quite figure out how to get my hands around though, like, of all things, Cinderella. I’ve been working on that one for years, and haven’t written a version I’m satisfied with yet.

You read that right: years–probably for what will end up being a 10-page short story or 20-line poem.

When I get stuck, I go back and read successfull reinventions of the tales, like those from Anne Sexton, Angela Carter, Jane Yolen, or Francesca Lia Block. I can reread some of Jack Zipe’s critical analyses and comb for different themes. At very least, I can have my breath taken away for a while, bow to their creativity and skill, and try again.

On the other hand, I can never unsee the excerpts from E.L. James’ books. They’re awful. They appeal to the lowest common denominator. I’m not talking about content here (although that is conceptually poor as well), I’m talking about writing well. It is not the case that because so many people like it or it made so much money it’s quality work. However, the books’ popularity have inspired so very many equally awful imitators.

This is an issue of input=output. Read your peers’ work, absolutely, and promote them, by all means. Also read things that make you jealous. Critically examine what that writer did to achieve that effect. You’re looking at technique here. Imitate it. It’ll likely start as derivative and just plain bad, but again, you’re practicing. It isn’t your best work, but you’re still writing.

Issue 6: The Need for Discipline That brings me back to discipline. Writing is like exercising. You’re working, if you’ll pardon the cliché, your brain muscle, your creativity muscle. It strengthens with time and practice. You have to get the words on the paper first though, and then do something with them on purpose.

This is why respected writers often take over a year between novels to produce and get published. They revise, experiment, revise again, start over, go on tangents, reorganize, restructure, and revise again. Revision is not the same as editing, which is not the same as proofreading, and all are absolutely necessary to improving craft and producing quality work. Dedicated writers do it even when they don’t feel inspired, maybe even when they dread the prospect. They do it anyway, and they do it on purporse.

Now, go sit down and write something with deliberation. Then go read a book by someone who gets lots of respect, maybe a literary figure. Learn more, over and over. You’ve got this.