“Once upon a time…” I think that was the phrase that sealed my fate. Like most little girls my age, I grew up on fairy tales. Mystical woods and faraway lands full of simultaneously unreal and all-too-real people and creatures drove my imaginary play. The woods between my house and my friends’ were alive with 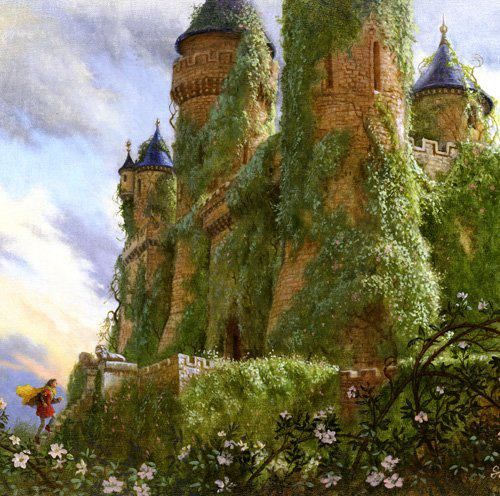 stalwart heroes, beautiful princesses, dangerous monsters and moss-carpeted clearings where, if you stepped into their centers, they whisked or dropped you into another dimension.

For better or worse, like most kids from that generation and afterward, my understanding of Grimm and Andersen’s tales was shaped by Disney. I remember sitting in my grandmother’s house in Scarsdale with my Cinderella coloring book and a twenty-four pack of stubby Crayolas on the metal T.V. table in front of me. Grandma Ada would watch as I colored the prince’s epaulettes shimmery gold. She’d point and say, “So handsome, just like your daddy.” I was brought up convinced that, like Snow White, Cinderella, and the others, if I was good and beautiful, I’d be taken care of and desirable. I did my best to learn how to communicate with the mice and squirrels in the woods behind our backyard. I’d understood that animal language knowledge was a boon in that regard. Long story short, I don’t have that particular talent.

That common if narrow interpretation of femininity began to change as I got older and discovered first, Wonder Woman and The Bionic Woman, and then Greek mythology. Women could also be strong and fearless—but they still had to meet a particular aesthetic to be desirable. It took years to work past the desirability goal of womanhood regardless of the story system. In the sixth grade, Athena was my idol. She was pretty, but not the prettiest goddess; she had no interest in being anyone’s consort; she was an intellectual who also kicked ass. I wanted to be her.

Again, like most women I know from my generation and others, physical beauty and desirability had to be part of the package, and I used to be ashamed of how deeply ingrained that criteria of personhood was within me. I used to place the blame on those stories, the products of a society that devalued women as a whole, regardless of any legal or social changes.

I’ve mostly re-framed that shame and embarrassment. I remember believing that Aphrodite was a bit of a hussy when I was a kid. She didn’t seem to have much function other than to embody love and sex. As an adult, and more importantly perhaps, as a woman whose bathroom rivals a small Sephora store for products and who’s lost count of how many shoes she has, I no longer see her that way. For one thing, love and sex are pretty darned important. The point though, as I see it, is to feel powerful in one’s physicality as well as intellect. Femininity is a social construct, and we can redefine, reject, or embrace any aspects of it we see fit. If feeling beautiful, however we define it, is important, there’s no shame in it. It’s basing that opinion solely on what others think that’s a problem.

At any rate, the intangible, the mystical, and the beautiful never really lost their allure for me. I can’t read Anne Sexton’s “Transformations” or any of Angela Carter’s, Jane Yolen’s, or Francesca Lia Block’s work often enough. They transport me to those childhood notions of wide-eyed wonderment of all that is beautiful and just beyond our understanding.

I don’t play pretend much anymore (well, let me qualify that, since I do play tabletop Dungeons and Dragons-type games on a regular basis). My imaginative outlet and playground have become writing, embracing my power, however strong or weak, in creating and recreating worlds. Many of my reimaginings of fairy tales have been published in literary journals over the years; obviously, I’m not alone in my fascination. My most recent publication was in an anthology called Classics Remixed, a collection of timeless tales rewritten for modern audiences.

See below for links to some of my fairy tale work: