I just returned from a long weekend at my “happy place,” an ashram in Massachusetts called Kripalu. As some of you know, one of the hats I wear is that of a yoga teacher (well, I don’t wear a hat when I teach). I try to get up to Kripalu every year or so for training, and to refresh and reset my mind and body. 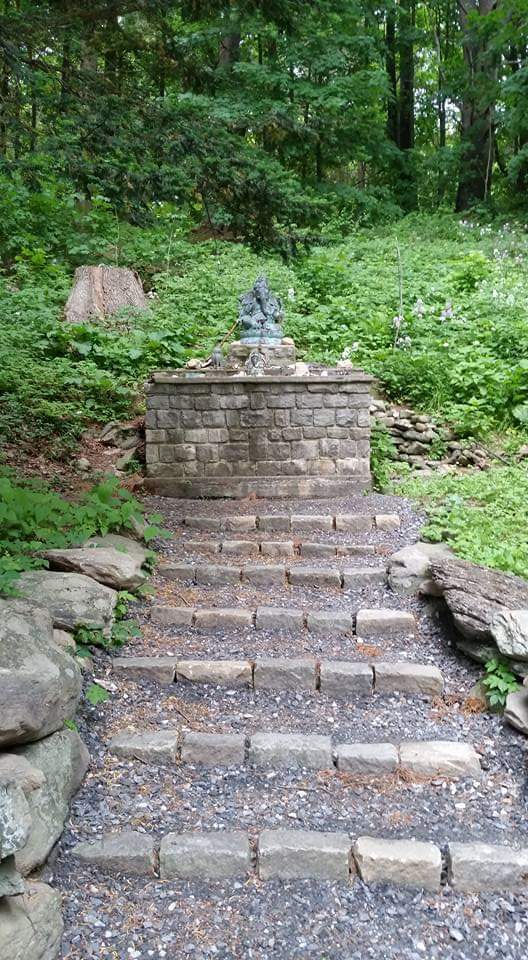 This trip was for a metta meditation retreat with Sharon Salzberg, one of my favorite teachers. Metta is the practice of goodwill, or lovingkindness toward ourselves and others, and it can get intense as we discover the things we truly have a hard time getting past in our relationships. The other part of the trip, at least for me, involves being outside in the mountains and woods as much as humanly possible. The pictures don’t do the place justice; they lack the depth, the scent of grass, flowering plants, and clean, mountain air; they lack the warmth and gentleness of the sun and breeze on the skin. I can’t get enough of any of it.

I’ve been playing around with ideas for a fifth book. This one would feature Miriam, at least in part. I hadn’t ever meant to do much with that character, and found that as much as we all love her, I don’t know much about her aside from what I wrote in the books. Beyond that, I’ve been finding it difficult to get into her head and find out about her personal relationships, how she processes things emotionally, and what drives her.

Hang onto that thought; I’m coming back to it.

I know  Kripalu’s grounds pretty well because I’ve been there so often. Nevertheless, every time I drop my bag in my room and head to the shrine to Ganesha, remover of obstacles as my inevitable first stop, I find something new. The offerings on the shrine have changed; there’s some tree or crevasse in a rock formation I never noticed before. This time, what was new was me. I began my weekend more preoccupied with my writing than I’d realized. Was W.I.S.E. Men ever going to find an agent? Would I come up with some credible story for Miriam? From those questions came the more familiar onslaught of doubts about my reasons for writing, and my abilities.

As I descended the uneven, wooden steps that led to the clearing in the woods, which in turn brought me to the feet of the deity, I had a hard time focusing on my beloved surroundings. I couldn’t get out of my head. I hadn’t even gone to the first meditation session yet—how was I going to do any of this? I set my small offering on Ganesha’s pedestal, stared at him for a few seconds, and forced myself to listen. For a large, busy place, the shrine and its surroundings were quiet. I heard several birds, the rustle of underbrush and leaves as chipmunks scampered about, and the sound of my own breath, which began to slow deepen.

I’m not a believer of any particular religion, but I like the depth of the metaphors in Eastern traditional stories. Ganesha doesn’t remove obvious obstacles, like the jerk in front of you on the road who drives ten miles an hour below the speed limit when you’re already running late. Ganesha removes the obstacles that blind us from our truest nature, our inner spark of divinity that connects us to everything else in the universe. Do I believe that there really exists or existed a man with the head of an elephant, who rode on a rat, once extinguished the moon in a fit of anger, and loves to dance? No. But I believe that within me is the capacity to release the fears and doubts that prevent me from accessing my creativity and confidence.

I sat on the ground at Ganesha’s feet and pulled out my notebook. I wrote.  I didn’t stop writing; I just scribbled down whatever random idea popped into my head, one after another, until I had filled a few pages. Fifteen or so minutes later, I had an idea of how to connect with Miriam, how to structure her story, and what other point of view characters ought to be a part of it.

Many people think of yoga as exercise, new-age mumbo-jumbo, or Instagram fodder. For me, it’s none of those things. Yoga is the yoking of body, mind, and energy. If I’m still and quiet, I remember they’re already connected, and part of that connection is my creativity, and the characters who live in my head. I think I understand what part of my psyche Miriam had come from.

By allowing my brain and body to settle, I got out of my own way.